What was done to remove the barrier? 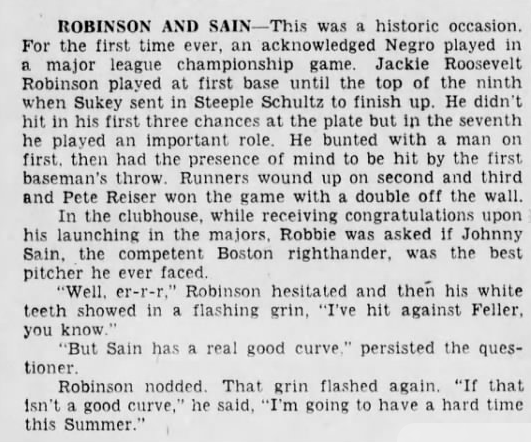 Over time, Major League scouts noticed the talent and wanted it on their teams. (Breaking). In 1947, Branch Rickey, the Dodgers manager, wanted to revolutionize the game by hiring talented black baseball players (Oshinsky). He sought a talented player who could change the oppositional mindset of other players (Swaine). Branch Rickey chose Jackie Robinson because he was a talented athlete with a mild temperament. He was also an excellent role model.   The Dodgers general manager noticed Jackie and signed him to their minor league team (Swaine). Branch Rickey told Jackie it would be a tough burden but he believed Jackie could do it (Mlb, director). Jackie Robinson debuted on April 15, 1947. Jackie earned a promotion from the Brooklyn Dodgers to the MLB and made his debut in front of 26,623 fans at Ebbets Field (Baseball Hall).​​​​​​​

Jackie breaking this barrier helped invite other blacks to break it too. These five players entering the MLB in two seasons helped the MLB realize that there should be more blacks in the league (Dan). At the end of the 1954 season, there were ten African-Americans playing (Dan). Jackie inspired everyone, so Latinos and other races started to come in the MLB too (Dan).      ​​​​​​​